Plant a tree in memory of Denis
An environmentally-friendly option 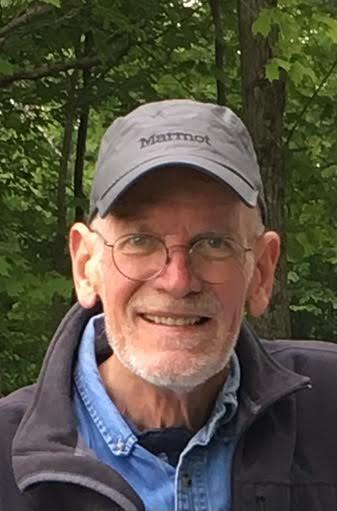 Denis John Poley of Richmond Vermont passed away on April 7, 2021 at McClure Respite House with his family by his side. After a short but valiant battle with an aggressive cancer, it was fitting he left us on National beer day as Denis loved a good IPA.

Born to Louis Casper Poley and Helen Joan Ranonis in 1945, Denis grew up in Teaneck NJ and spent his early summers on the Jersey shore where he met his wife Maria in High School. Moving from Jersey to Stowe in 1965 with Maria, they settled in Richmond in 1970 where he remained until his final days.

Growing up with Maria and his 2 sons Denis and Erik, he used to ride the high spring waters in the annual raft races down the Winooski and could be found hiking, cross country skiing, canoeing, and camping around the green mountains.

Denis and Maria loved family and always put on a big spread and decorated for the 4th of July in Richmond for anyone that wanted to watch the parade from their lawn.
Denis and Maria’s biking adventures would include biking from Richmond to the North Hero house, rides on the Stowe bike path or the rail trail from Jeffersonville to Morrisville stopping for lunch at Lost Nation Brewery.

He was an avid birdwatcher and gardener and loved to canoe and kayak, fish the streams and hunt for mushrooms at Waterbury Reservoir.
Denis had a particular talent for hand illustrated cards on special occasions, sketches, and wood carvings.

Starting every morning with a crossword, Denis also kept a detailed log of events thru the years, birthdays, birds seen, readings from his personal weather station, the height and width of each Christmas tree, how well it held onto its needles and a detailed blueprint of the garden layout each year.

Denis spent time volunteering for Meals on Wheels and COTs.
For 30 plus years Denis enjoyed his work as a chemist for IBM in Essex Jct. followed by his work in pharmaceuticals at Mylan Technologies in St. Albans.

Denis leaves behind his loving wife Maria of 56 years marriage, son Denis with wife Renee, son Erik with wife Amy, along with four grandchildren and their spouses and five great grandchildren. Chris and Melanie Poley with Benson, Luca and Hallie, Josh and Majken with Emelia and Ariya, Mikaela and Tristan Butler, and Joey Poley.  Denis also leaves behind a twin sister Denise and husband Alan Kerner and a niece Amy Sanderson and family.

There is no public service planned.  In lieu of flowers, donations may be made to the McClure Miller Respite House in Colchester VT, Meals on Wheels, or COTS.

Plant a tree in memory of Denis by clicking here.
To send flowers to Denis' family, please visit our floral store.

A service summary is not available

Plant a tree in memory of Denis
An environmentally-friendly option

Plant a tree in memory of Denis

8 trees planted in memory of Denis

Maria I want to send my condolences to you and your family.  Joan and Jim Cleary

My deepest condolences to Maria and family. Denis and I worked together in the chemistry labs at IBM for many years and I will always have fond memories of him and those times. I was the fortunate recipient of some of his outstanding hand drawn cards, which I will always cherish with my other IBM memorabilia.  Rest in peace my friend.

With much sadness, we received the news of Denis passing. So many years and memories of friendship and family times we all spent together are everlasting and I know planting a tree is right for him!
Sybil and Jeff

A Memorial Tree was ordered in memory of Denis John Poley by Sybil and Jeff.  Plant a Tree

Plant a tree in memory of Denis